I’m calling this final post on Istanbul “City Life” as a way to include whatever didn’t fit in the four previous topical posts. It will likely end up being a bit of a mish-mash, but I hope it is worth a read nonetheless.

Istanbul is a bit of a mish-mash itself, located partly in Europe and partly in Asia, with its history of Roman domination, followed by the conquering Ottomans, followed by its founding as a republic. The evidence of old Constantinople is present in the Valens Aqueduct, which was completed in the late 4th century AD and still standing.

The influence of the Ottomans is evident in the multitude of mosques that dominate the city skyline. 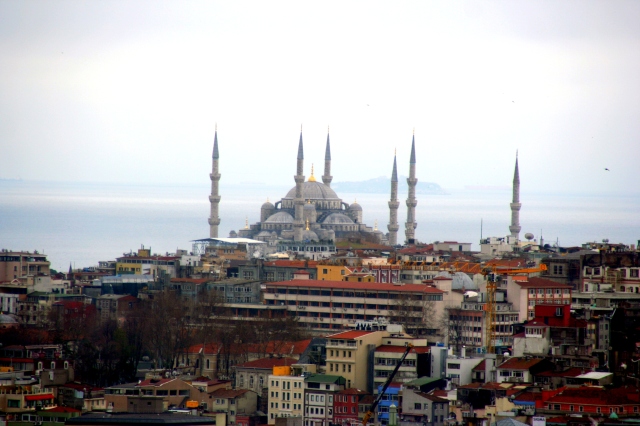 Atatürk is still revered as the founder of the Turkish republic. On this monument in Taksim Square, Atatürk is shown on one side as a general leading a revolution and on the other side as a statesman leading a republic.

The sultans also left behind major palaces. Below is Dolmabahçe Palace, a lavish structure built around 1850. Photos were not allowed inside, or I would share with you the world’s largest crystal chandelier and an unbelievable crystal staircase. 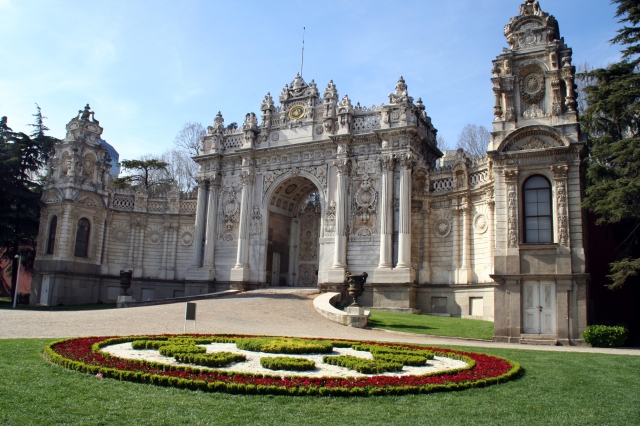 Atatürk spent the last days of his medical treatment in the palace as his health deteriorated. He died at 9:05 a.m. on November 10, 1938, in a bedroom that is now part of the palace museum. All the clocks in the palace were stopped and set to 9:05 after his death.

Istanbul is home to about 14 million people in its 2,063 square miles (5,343 sq.km.) and there are crowds everywhere. From the bustling, commercial Istikal street…

…to the side streets in the historic quarter.

The Princes Islands, nine islands located 20 km away in the Sea of Marmara, are a popular getaway destination for Istanbul’s urban dwellers. My daughter Bryn and I went on a day trip to Heybeliada, one of the islands, and were reminded a bit of our trip to Michigan’s Mackinac Island last year (although there were no fudge shops). Vehicular traffic is limited on Heybeliada and horse-drawn carriages dominate. 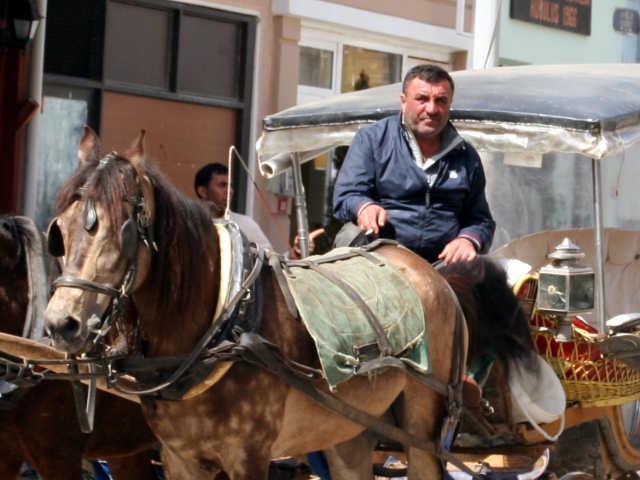 We got off the ferry boat and wandered around town for a while, watching a youthful soccer game and admiring the boats in the harbor.

We hiked up to a posh hotel and back, appreciating typical Turkish architecture along our way. 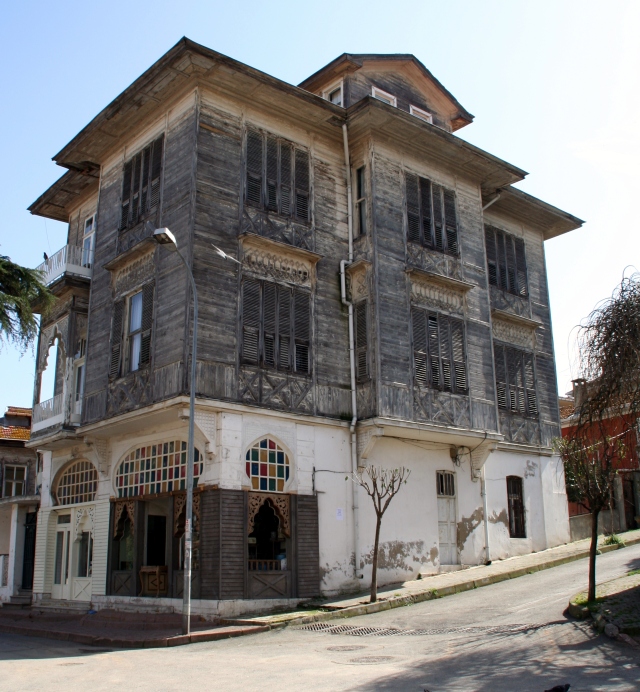 Eventually I decided we should take a carriage ride in order to see the entire the island and we passed through peaceful forests and by remote beaches.

Another day we took our host’s advice and took a bus to the northern part of the city and then hiked up to the Pierre Loti cafe with its spectacular views over the Golden Horn and the city. Named after a French novelist who frequented the area, the cafe is perched just above a cemetery where many important Ottomans are reportedly buried.

Back in town, it was typical to see men hauling heavy loads using various contraptions such as the one below. As I’ve mentioned the city has many hills and I did not envy the men (and boys) I saw employed by this activity. 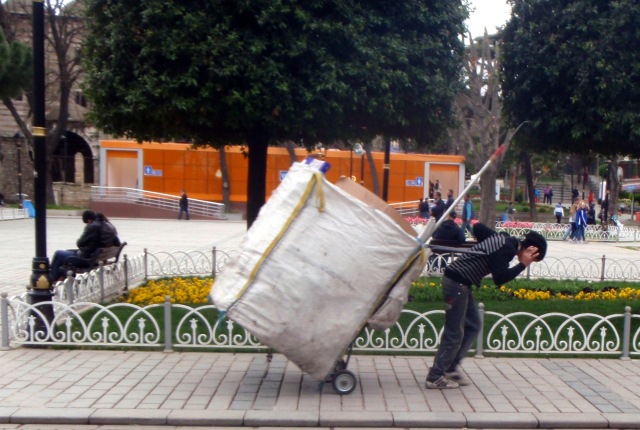 There was also an abundance of cats in the city. Some street dogs, but mostly street cats. They were everywhere and for the most part seemed content and well fed.

Two “must-see’s” in Istanbul are the Grand Bazaar and the Spice Bazaar. The Grand Bazaar is one of the largest and oldest covered markets in the world, with 61 covered streets and over 3,000 shops. One can buy anything from jewelry to carpets to ceramics to turkish delight to clothes to … 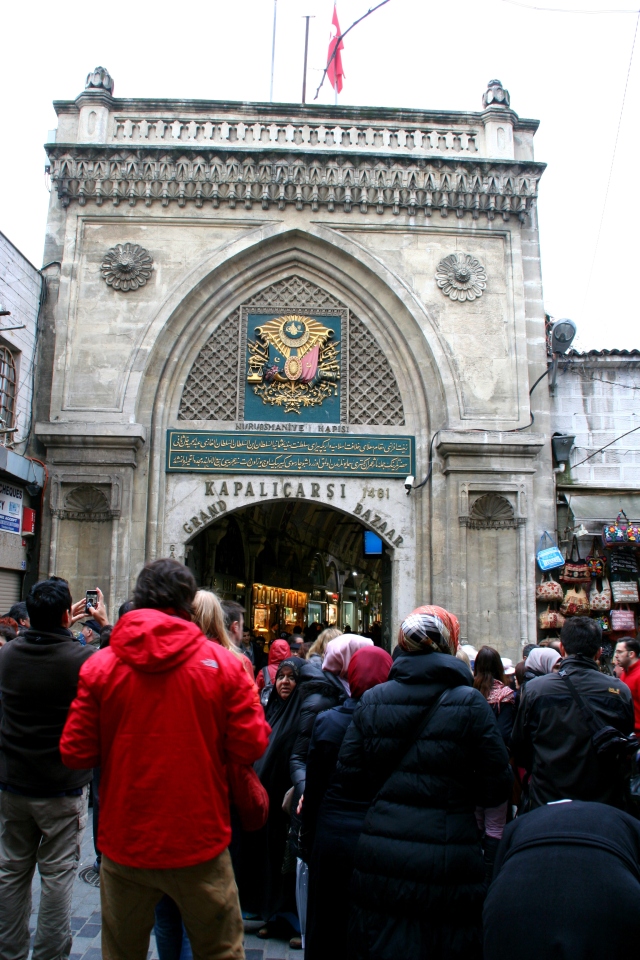 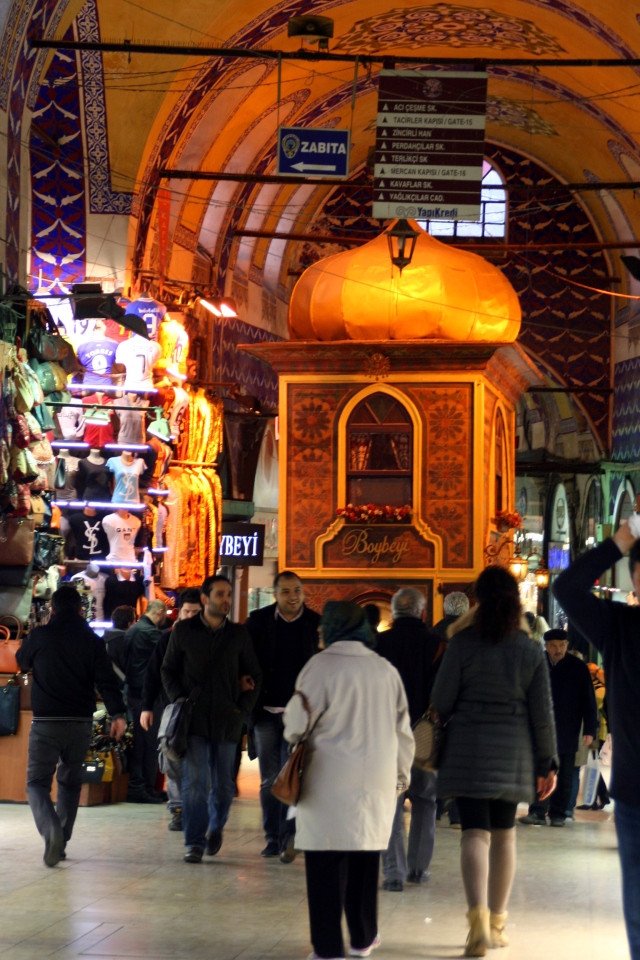 The Spice Bazaar is smaller than the Grand Bazaar, although still enormous, with 88 vaulted rooms. One can buy anything from saffron to curry to cumin to apple tea, to kebab spice mix to … 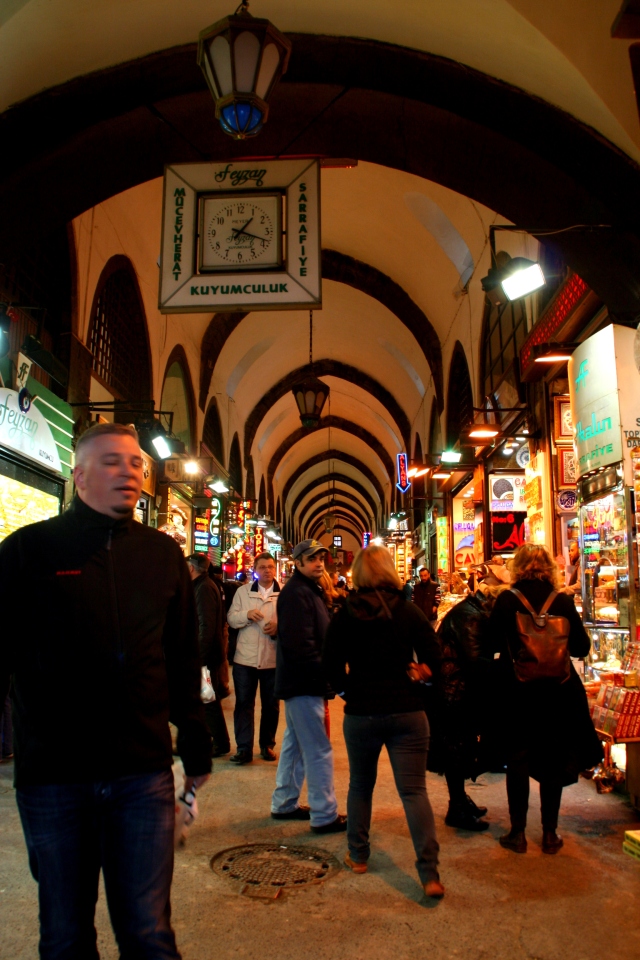 The area just outside the Spice Bazaar is also an exciting market area, frequented mostly by locals.

These areas look quite different at night, however. Bryn and I got a bit turned around one evening, trying to find our way to a hamami, or Turkish bath, and this is what we experienced.

We eventually found our way to the hamami and totally enjoyed it. No photos, however, you’ll just have to imagine a lot of mostly naked, soaped up women.

I do have photos from another very Turkish experience: a hookah cafe. Bryn really wanted to sample this piece of local culture, so my friend Sungur took us to one. We tried apple-flavored tobacco, apple tea and soaked in the ambiance. 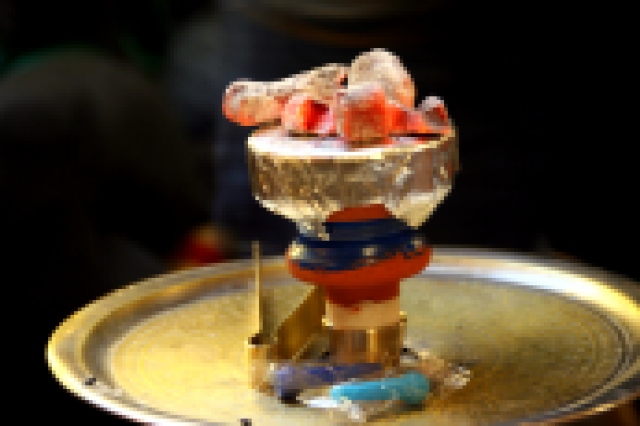 Even babies were welcome.

One of the coolest places we went was the Basilica Cistern, the largest of several hundred underground cisterns and built in the 6th century during the reign of Byzantine Emperor Justinian I. This cathedral-size cistern is an underground chamber approximately 450 feet (138 m) by 210 feet (64 m) – capable of holding 2.8 million cubic feet (80,000 cubic meters) of water. The ceiling is supported by a forest of 336 marble columns, each 30 feet (9 m) high, arranged in 12 rows of 28 columns each spaced 16 feet (4.9 m) apart. 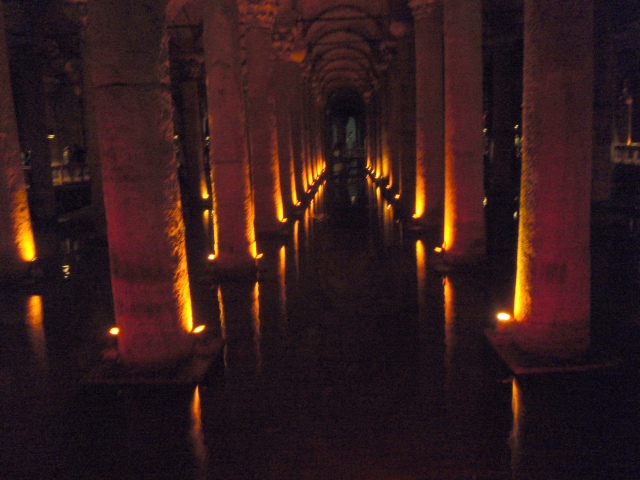 It is thought that the columns were salvaged from other buildings, since they include a variety of designs and materials. Two columns rest on bases with carved Medusa heads. One head is oriented sideways and the other is upside down, purportedly to negate the power of Medusa’s gaze. 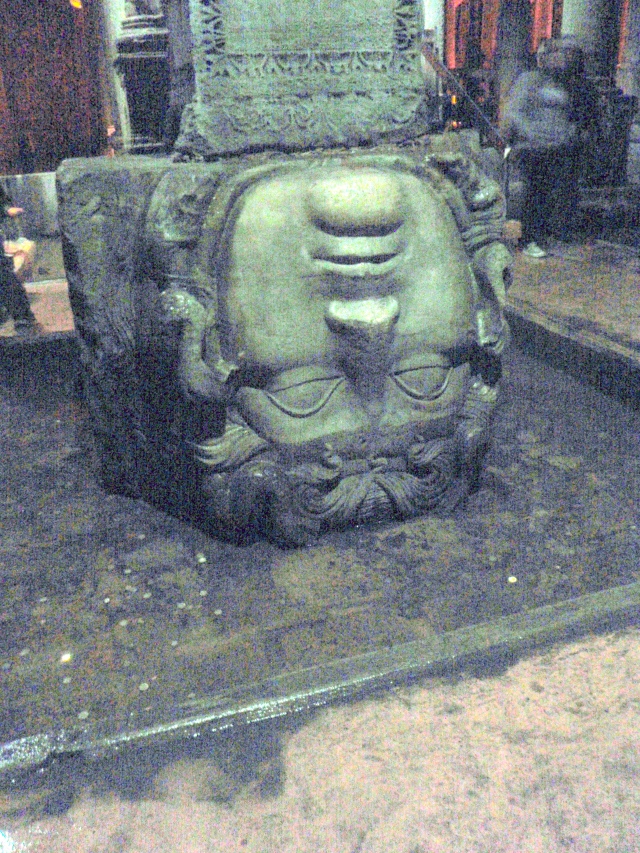 The Galata Tower is another of Istanbul’s striking landmarks and dates from the 1300’s. The tower offers terrific views of the city. 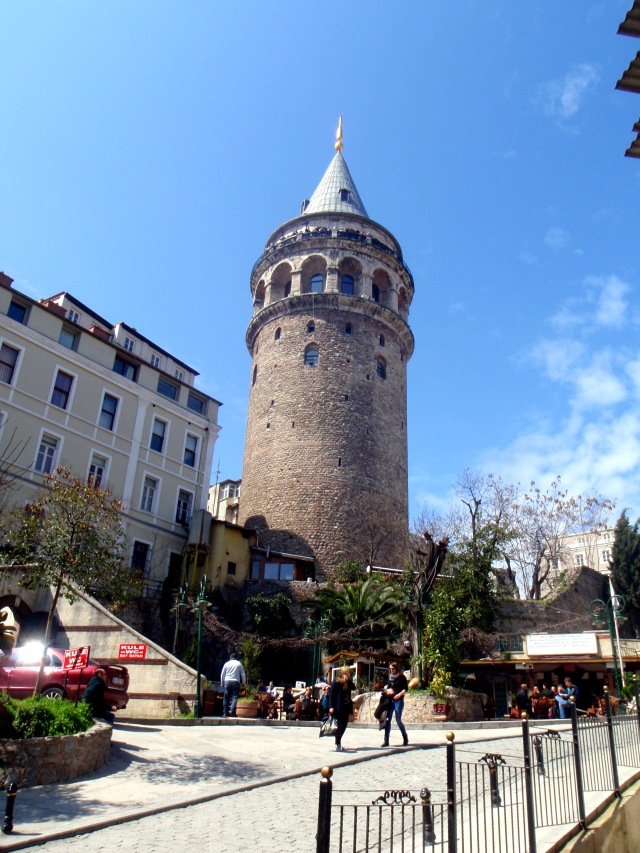 I will conclude this rambling post with a series of images that I will let speak for themselves. 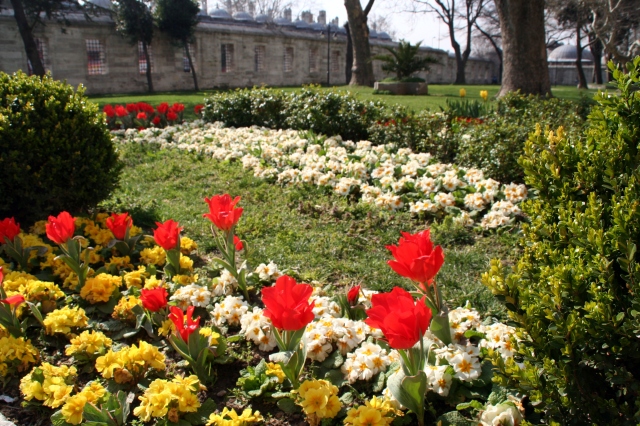